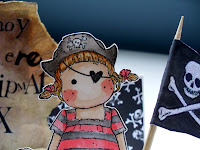 Its been some time since I have used my distress inks as for a while I have been using a lot of digi images. I put a stop to that for a mo and inked up some new Magnolia stamps I bought on a little trip out of Town.  I used two images one is the little pirate  girl the other the barrel, anchor and skull. I was also lucky enough to buy the Magnolia patterned paper in which I think goes really well with the images.

For the scroll which I added a number of rub ons  for the message I used printer paper I washed it with a number of distress inks crinkled it up and ripped it. I also made the little flag and rolled it around a wooden skewer.  I added a little sparkle to the skull and crossbone on the flag and pirates hat. I am going to enter this into the Magnolia challenge which is asking for us to use at least two Magnolia stamps on a project.
TFL....... I apologise for the poor light on the picture... 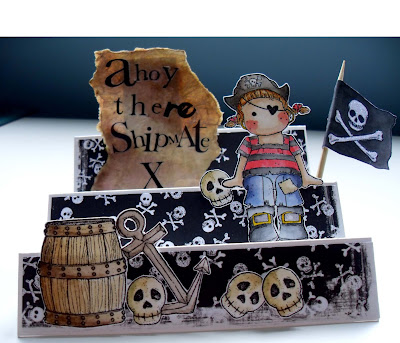 WOW! This card is fantastic! You did an amazing job with those cute pirates!
Thank you for joining our Just Magnolia challenge!
Hugs, Dena

Oh wow!
This is absolutely stunning!
Your colouring is superb and your design amazing!
So brilliant!
hugs
kim x

What a fabulous card, really like your distress ink colouring in..

Oh Jane!! This is fantastic, you are so talented my friend :)

Wow...this card is awesome! I love how you did the layout! Perfect card!!!!!

Wow this is wonderful Jane, love the fabulous design! Thanks so much for joining our JM challenge this week x

Wow Jane - even more than usual - all the details on this one are just fabulous!

Brodders
Married to a lovely kind and considerate man for 34 years. I have two sons Tom and Joe who I love with all my heart.